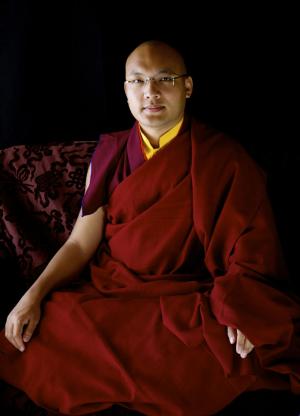 The 17th Karmapa, Ogyen Trinley Dorje (1985 – ) was born in 1985 to a Nomad family in Tibet.  There were many auspicious signs surrounding his birth.  During her pregnancy his mother dreamt of three white cranes offering her a bowl of yoghurt.  A brilliant gold letter sat atop the bowl and signified her forthcoming son. The cranes told her they were sent by Guru Rinpoche and the golden letter was the recognition letter for her son but that she should keep that information secret until the right time came.  The night before his birth his father saw rainbows over the tent and was surprised, as the sun had already disappeared behind the mountains.  The baby was born the next day without pain or difficulty.  At the same time a cuckoo landed on the Yak hair tent and sang.  Two days later, the celestial sound of a conch shell, prophesised by the 16th Karmapa, was heard by all members of the nomadic community.  Unknown flowers blossomed in the area and three suns were seen in the heavens, a rainbow arching over the middle one. This last phenomenon was seen widely throughout eastern Tibet.

After his birth he was given the name of Apo Gaga, Happy Brother. It became obvious early on that he was a very special being, gifted with clairvoyance and authority.  He was able, for instance, to tell people where to find lost sheep and cattle. When asked about the boy, a local oracle, gifted in the form of divination known as mirror-seeing, saw the form of a white conch with a clockwise spiral.  He predicted that Apo Gaga would greatly benefit sentient beings but that his destiny would not become clear until he was eight years old.

The young Apo Gaga spent about four years receiving a special education at Kalek Monastery, where he was given the attention due to an unrecognised reincarnate lama.  During this time he would spend some time back with his family in their nomadic round.  His parents report that he would often build toy monasteries from earth or stone.  They say he would ride off into the hills on the back of goats or wild animals, that he would cry whenever animals were hurt or killed and that he always showed compassion.

In 1992 he insisted, without explaining why, that his parents move to their summer pasture’s birth.  His father was presented with the prediction letter from the 16th Karmapa and it was only then that he realised who his son was.

As the party left for Tsurphu, three suns appeared again in the hazy sky and were seen by many hundreds of people in the area. The middle one was larger and had a rainbow halo, while the other two were smaller and nestling in the clouds. Over 20,000 devotees assembled to witness his return to Tsurphu and two months later, His Holiness was enthroned at Tsurphu Monastery on September 27th, 1992.

At Tsurphu, the Karmapa began his studies in Tibetan, the Buddhist sciences of mind, ritual, 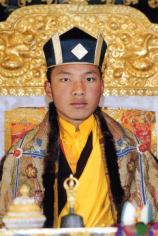 and  the sacred arts, such as dance. Each day he also gave audiences to hundreds of visitors from across Tibet and around the world. He soon began to bestow empowerments and participate in various rituals at the monastery. At the age of ten, His Holiness began to recognize  the reincarnations of other  Kagyu lamas, including such eminent teachers as Pawo Rinpoche, Jamgon Kongtrul Rinpoche and Dabzang Rinpoche. In addition, while His Holiness was at Tsurphu, the monastery underwent extensive rebuilding to restore the temples, shrines, stupas, a shedra, and residences that had been badly damaged during the Cultural Revolution and then neglected over the years, fulfilling another of the duties of a Karmapa.

However, in order to exercise his future role, His Holiness needed to receive all the empowerments and transmissions of the lineage, but he was unable to do so in Tibet as many of the Kagyu lineage teachers were living in exile in India. With this at the forefront of his mind, he and a handful of attendants left Tibet for India.

After months of careful planning, on December 28, 1999, the fourteen-year-old Karmapa pretended to enter into a solitary retreat. Instead, he slipped out of his monk’s robes, donned civilian garb, and climbed out of a window, accompanied by his personal attendant, Drubngak. Leaving Tsurphu Monastery with a handful of his attendants, he began a daring journey by car, foot, horseback, helicopter, train and taxi: an heroic journey which was to become the stuff of headlines throughout the world. On January 5, 2000 he arrived, to the great surprise and overwhelming joy of exiled Tibetans and foreign devotees, in Dharamsala, India, where he was met by His Holiness the Fourteenth Dalai Lama. A year later, in 2001, he received refugee status from the government of India.

Since then His Holiness has continued to live near Dharamsala and currently resides at Gyuto monastery in Sidhbari, where he is able to give regular dharma teachings, empowerments and guidance to those who request it.  Since 2004, he has led the annual Kagyu Monlam Chenmo in Bodhgaya, which attracts many thousands of dharma practitioners from around the world and from many Buddhist traditions. 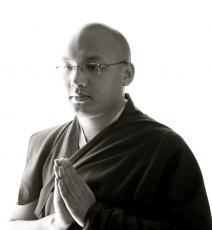 In 2008, HH Karmapa made an historic visit to the United States.  It was the first time His Holiness has been able to visit the west and there he gave dharma teachings and empowerments to many thousands of people.  He was granted permission again in 2011 to return to the United States to attend the Kalachakra ceremonies with His Holiness the 14th Dalai Lama.

As a scholar and meditation master, as well as painter, poet, songwriter and playwright, the Gyalwang Karmapa embodies a wide range of the activities that Karmapas have engaged in over the centuries. As an environmental activist, computer enthusiast and world spiritual leader whose teachings are often webcast live, the Seventeenth Gyalwang Karmapa has brought the Karmapa lineage’s activities fully into the 21st century.

More information on His Holiness’ activities, including latest news and teachings can be found on the Official Website of the 17th Gyalwang Karmapa by clicking here